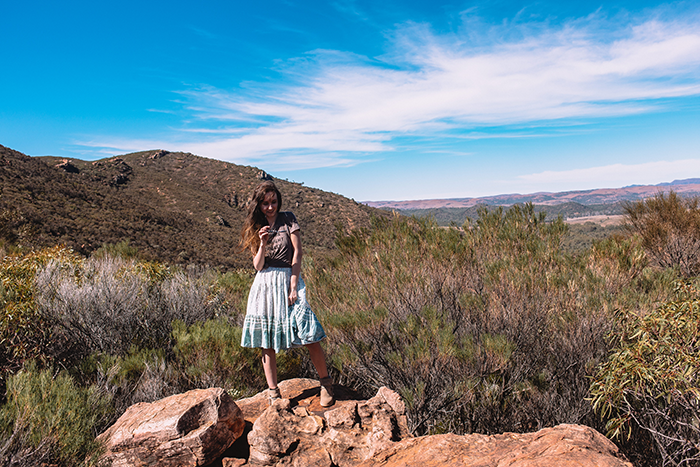 Heading Into the Outback

Up at 5am in order to be at the tour pickup at 6am. Not too fun, but meh, you do what you gotta. Plus, I was really looking forward to this tour with Adventure tours.

We were the first ones picked up. And after everyone else was loaded on, we headed out through a drive through Clare Valley. A few hours later, we stopped in a little town for about 45 minutes in order that everyone could grab some food, coffee, and the bus could get loaded up with supplies. One odd thing I had by now noticed about Australian cafes: they don’t necessarily have bathrooms. In Canada, in order to have an establishment where patrons sit down and eat (whether pastries or whatever), you legally have to provide a restroom for customer use. Not so in Australia – this I learned a few times completely taken aback. Further, even if they do have one, it’s usually outside and around the back. Again such a weird thing, but I guess coming from a cold climate everything has to be accessible indoors, whereas that’s not so much of an issue in a warm clime. Back to driving. The countryside was beautiful, and Australia is known for dry farming and a diversification of crops. Because of the harsh climate, dry farming makes sense, and it’s only been surpassed recently by Arab countries in terms of being number one dry farming country in the world. But also the diversification of crops since it’s likely that something will fail, and you have other crops to lessen the blow. Very cool, and makes total sense. After arriving at camp, the first hike of the week was in order. This was a small 3k  hike that led to two lookouts over the wonderful countryside that would be hosting me for the night. Because it would be hosting me as I would be sleeping on the ground, in a swag. For those who don’t know, and I didn’t, that is a foam mattress wrapped in a layer of thick canvas. And you either sleep on top in your sleeping bag, or unzip and stuff the sleeping bag and yourself between the mattress and the canvas for added warmth. I went with that option. Here is the campsite and our swags rolled up and ready to be chosen.