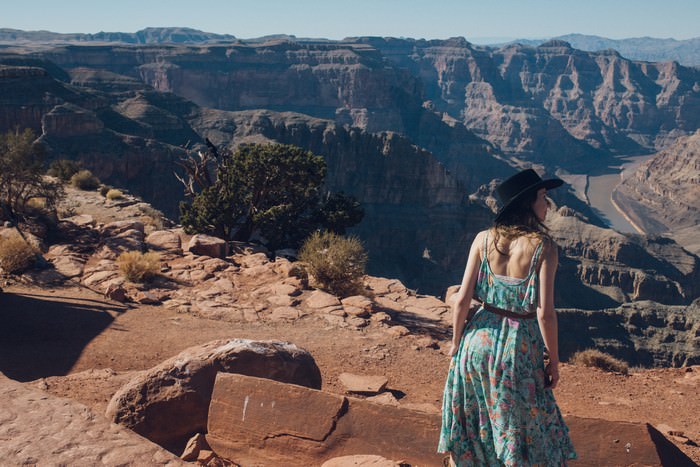 Grand Canyon West in Arizona is actually on a Native American reservation. So they don’t let you just drive up there willy nilly. As you enter the road is blocked and you drive off and park in the huge lot. Then they have a center set up with tons of gift shops, and also all the tour options. The only way to see it is to book a tour. Since neither of us wanted things like helicopter tours or fancy skywalk tours – a glass u-shaped bridge that juts out over the canyon – we chose the basic package: a shuttle bus that takes you to a few scenic viewpoints, and also a little outdoor Native American museum of traditional buildings. Now, we’ve already established that my fear of heights is less than my Mother’s.  But there’s an even greater difference. I’m not that afraid of natural heights, more man made heights. I’m not terrified of the Canyon or mountain as much because I have faith in it. It’s been there millions of years, there’s solidity. I don’t have faith in that man made thing – you know, the one where John was putting in rivets on Monday morning hung over and distracted ’cause he wife just left him. That’s where my brain goes, and I have no faith in our workmanship – and total faith in human error. Hence, terrified of the bridge, just a little nervous about the canyon. Guess who I found in one of the gift shops? Han, Luke, and Leia! It looked so out of place with all the Grand Canyon souvenirs and Native American gifts. But it made me smile. Us scifi nerds are everywhere. The Grand Canyon really is breathtaking. It’s so vast, and so spectacular. I can imagine people 200-300 years ago coming upon it and literally thinking that this is the end of the world, and beyond is another world. It goes on and on seemingly forever. And though I know it isn’t, it looks impenetrable.  What a marvel. Really makes you feel very very tiny. And moments like this that humble you are important. It’s good to know that you really are tiny.