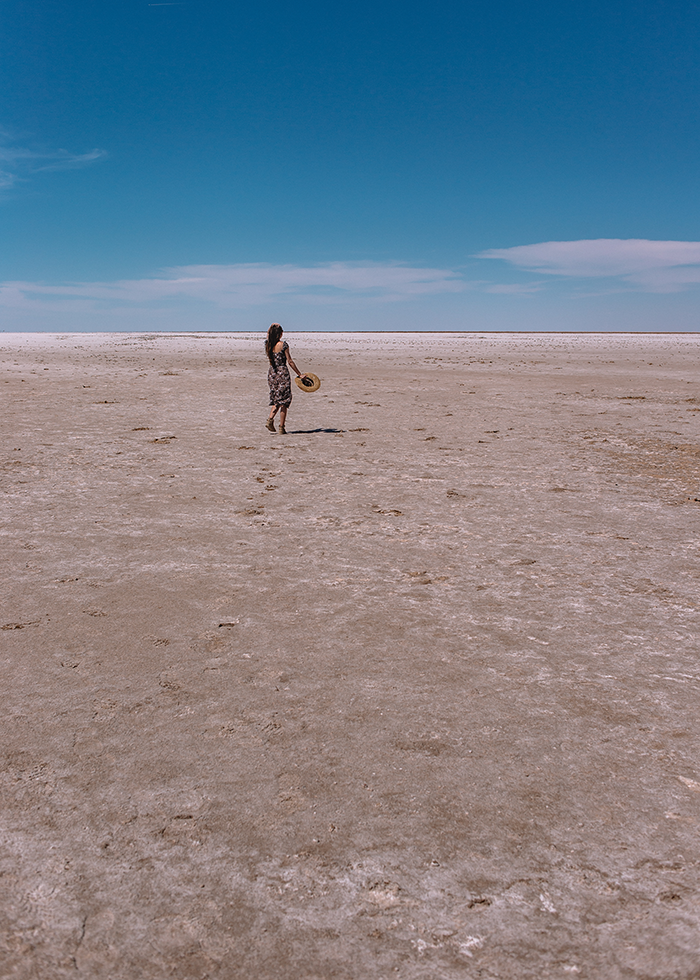 Lake Eyre and the Dying of a Bus

At lunch we had stopped at Marree, before heading to Lake Eyre. Now Marree hasn’t much claim to fame, or if it does, I’m not familiar with it. It’s a small town and a stop over in the Outback.  Here, everyone stocked up on water at the general store, because, you see, we had been provided two large coolers of drinking water and it was so hot that the group had already gone through more than half. And it was the only drinking water we had for another day and half. Yeah, not fun, and had me a bit worried. SO I bought two 1.5 litres of very overpriced water. It was tourist prices, but I’m okay with that – in a small rural community I’m not going to begrudge the shop the extra mark up.  What are you going to do, am I right?

Later that afternoon, Lake Eyre was the focal point and destination. It’s a misleading name in that it’s not a lake at all. It’s a salt lake. A massive salt lake that stands empty most of the time. It contains the lowest natural point in Australia, and when it fills up it’s the largest lake in Australia as well.  It fills up rarely, but when it does, it attracts lots of birds from all over the place, and people hire planes to fly over and see this spectacle. But this time, it was hot, dry, and salty. Upon returning to the bus we were greeted with a flat tire, in the high afternoon heat with no shade around. This came upon the heels of two other misadventures on the bus. Namely, the lock on the main door had broken and was kept closed by a system of straps that had been devised. And one storage door had completely fallen off and was attached to the bus with duct tape. Lots of duct tape. This, along with the water issue, was not inspiring confidence in the vehicle that was supposed to get us through the Outback. So there we huddled in the small shade provided by the bus while several folks worked to change the flat tire. Well, it certainly was turning out to be an adventure.

And today, as you celebrate Christmas, or as you enjoy the day off if you don’t, I hope you have a day full of family and friends and lots of love. Sending you joy on this day!