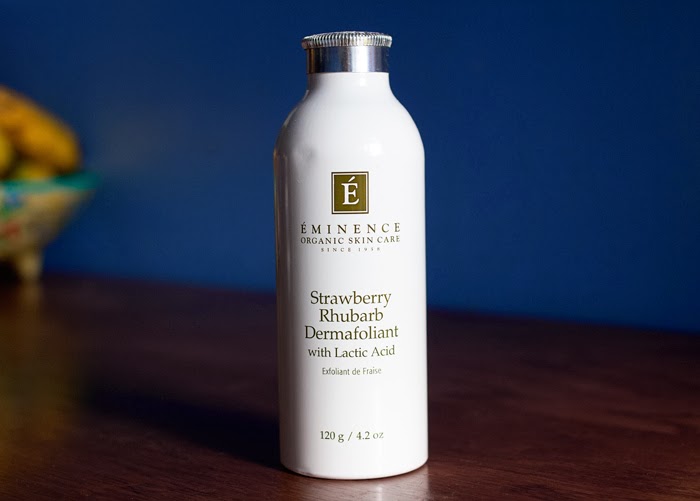 Every cosmetician I’ve ever known has hounded me about exfoliation.  But honestly, I’ve tried a lot and they left my sensitive skin feeling raw and red,  and that doesn’t really make me want to repeat it often.  I thought it was the fact that it was so gritty and harsh that had my skin screaming, but I think now that it was whatever else was added to the exfoliator.

The Strawberry Rhubard Dermafoliant from Eminence is just a pure powder of organic ingredients.  You shake out the powder onto your hand, add a touch of water and scrub your face with it. It’s gritty and I thought it would be just as rough on my skin, but it isn’t.  Like I said, I guess it was all the other additives in previous products that inflamed my skin.  This is simply grit that scrubs away the dead skin cells.  When I say simply, I don’t mean it’s just grit, the list of ingredients is impressive and completely well thought out.  In saying ‘simply’ I mean there’s nothing unnecessary thrown in there.

Apparently, for me a large part of my problem was clogged pores and dead skin build up.  Kind of gross, but at least exfoliation can help with that.  And I’ve loved that it helps to add a glow to my skin and reduce the amount of breakouts.