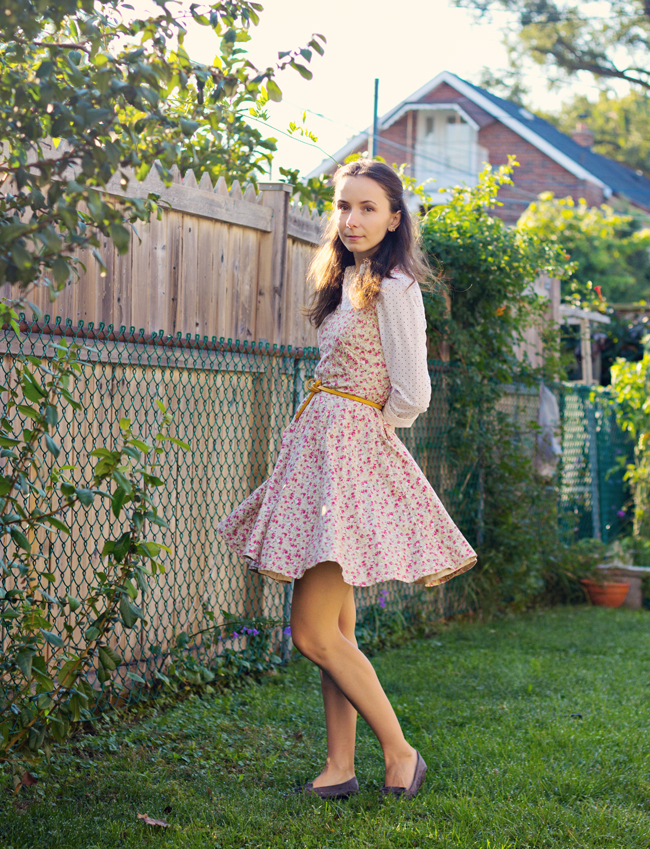 Top – Joe Fresh
Dress – Soprano, originally from Ruche
Belt – F21
Shoes – Payless
I wish I was one of those women who was truly upbeat and always saw the silver lining, but I’m not.  Yes, cognitive behavior therapy and such might change my spirits.  But let’s be honest.  I’ve always been a “half empty” or at least “it’s at half” kind of girl.
Maybe it’s a bit of the tortured artist syndrome.  Maybe I think that in order to be a truly inspired person I need to have some melancholy or madness in my being.  Hey, Van Gogh didn’t chop his ear off because he was happy, right?
I feel a bit like that Greek myth where the man is punished to pushing a boulder up the mountain only to have it tumble back down just as he nears the top.  Thus, ensuring that he’s pushing that boulder up a mountain for eternity.  I’m hopeful that one day that boulder will stick.

Isn’t that the mark of madness though?  Doing the same action while expecting a different result?  Sometimes I wonder if I’m not completely insane for being an actor.  Scratch that, I know I’m completely insane. I’ve got a standing invitation at the Mad Hatter’s table.

Best advice to someone considering acting:  if there is anything else you can be happy doing, do that.  This is for those painfully stricken with the disease of needing to act.

True Story:
After Baby Girl’s nap we read every single book in her room.  Every.Single. Book.
Then she twirled and twirled until she crashed into her crib.
And two hours spent in water play with bowls and a sandbox.
A good afternoon.
Tags: Button Ups , Dresses , Florals , Pink , White