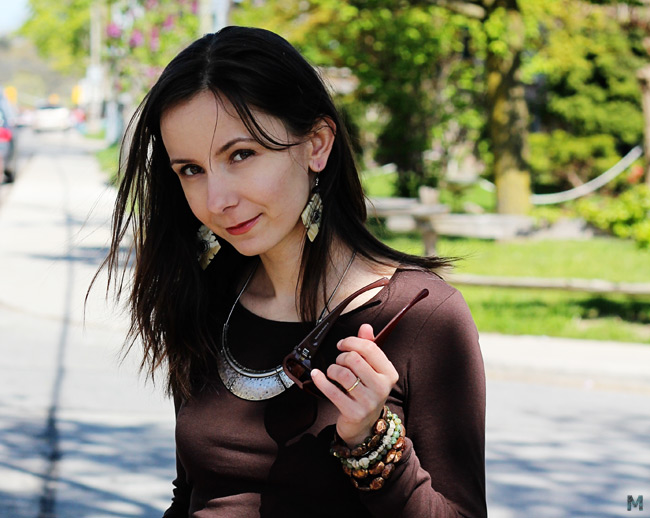 She’s Funny That One! Earrings – somewhere in Europe
Necklace & Bangles – F21
Sweater & Sunnies – thrifted
Top – H&M
Skirt – Ruche
Boots – Threadsence
It’s still cold outside, and the sun rarely makes an appearance, but I’m certainly energetic and productive and alive lately.  Not only have all my sites been spruced up or re-designed *check out the acting and the photo sites* but I’ve been running from audition, to callback, to wardrobe fitting, to shoot for weeks now.  It’s a wonderful feeling to be so busy and in demand you have to start getting people to re-schedule in order to accommodate a meeting. I need to share this joy with you!
On top of that I’ve been enjoying the company of my baby girl to no end.  She’s funny that one!  I thought I would really miss the baby stage, and though I do miss it, I love this stage much, much more.  The one where she’s company, has thoughts to share, and loves to play jokes on us is so entertaining.  It’s like hanging out with a friend now, albeit a poopy and demanding one.
True Story:
Walking to playgroup one day we stop and see a snail in the middle of the sidewalk.
She bends down and pets it like she pets Drake the Dog.
When it’s time to go, she waves goodbye to the snail and continues walking.
Then five steps later, she turns back to the snail and waves again.
She does this every five steps until the snail is nothing but a tiny speck.
Though he doesn’t have good ears or eyesight, I’m pretty sure he felt a lot of love sent his way that day.
Tags: Blue , Brown , Cardis , skirts , Stripes , Sweaters