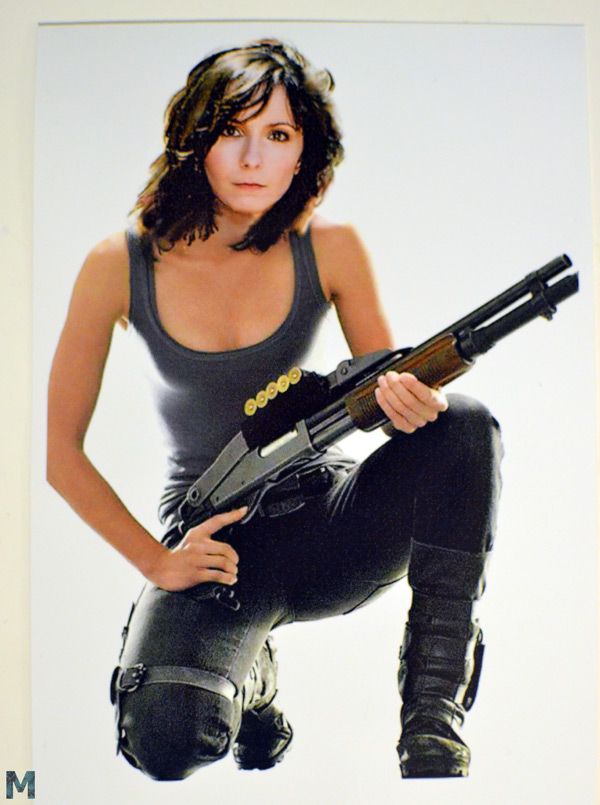 Now I Have A Machine Gun. Ho-Ho-Ho!

Husband said he had a surprise for me for my birthday. He wouldn’t tell me what, only that I had some outfit restrictions. *more on that at another time*  I was wary, and a little nervous because I feared I would hate what he had planned and I would have to pretend to like it.  But he did good.

Once we dropped Baby off at the grandparents, he gave me a cd with a ‘message from the future’ *made by him in a distorted voice* about how the zombie apocalypse came and I had to save humanity.  So I had to continue my martial arts training with live firearms.  And that’s what we did.  I learned to shoot. It was amazing!  I’ve always wanted to learn to shoot firearms, and this was a great thing for him to take me to do.  It was so natural too *kinda scary, I know*  I wasn’t scared, or nervous.  Husband even said that I looked really comfortable and confident.   What I love about it is that it’s so precise, there’s so many minute little details to think about, and there’s so much for my perfectionist brain to latch onto.  It also gave me a larger respect for the power and danger of firearms.  But what I wasn’t expecting was the incredible calming nature of it.

When I had the Glock 9mm *I liked that one the best* in my hands and was aiming, it was like the whole world went away.  I was so focused on what I was doing that nothing else mattered.  There was something single-minded and calm and focused in going through a clip.  I guess that’s true with anything requiring a single focus, but in this case I felt that heightened because I was dealing with something lethal so the importance of focus was even greater.

Anyway, it was amazing.  I know some people hate guns *you are right to feel however you choose – pro or anti* , and I don’t advocate everyone going out and buying a gun, but I think like anything they have their place.  And me, as a woman who loves martial arts, swords, and post-apocalyptic films this is a skill that appeals to me.

Yes, we also went shopping and had a wonderful meal including an amazing chocolate torte, but this was definitely the highlight.