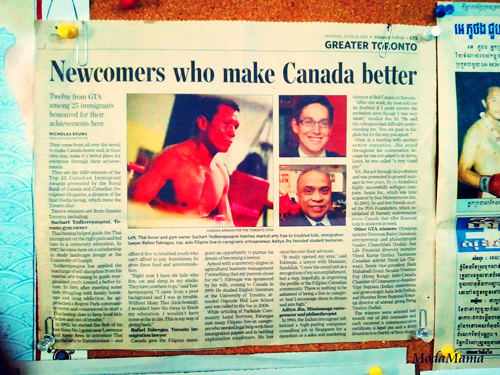 As you may know, I’m looking for a new place to train, and to that effect I’ve been trying lots of places to see where my new home will be.  I tried a Muay Thai place around the corner from me a few days ago.  My experience was colorful to say the least.

When I first arrived the secretary was completely vacant.  She seemed like she was either stoned, bored, or just didn’t care.  Right away I was turned off the place by this lack of a welcoming attitude.  She wasn’t helpful at all in helping me figure out where things like change rooms, washrooms, and waiting areas were.

The place itself was like a rough and tumble boxing gym, which is kind of what I expect since this is Thai boxing.  And it’s actually an atmosphere I enjoyed, so for me this was a plus.  The workout was simplistic, but effective,  and again I’m not necessarily one who cares about finesse in conditioning – as long as it get the job done I’m happy.  But the thing that turned me off was after that.  The art itself consists of very few moves.  It’s very much a hunched in, simple stance boxing art.  I’m not knocking boxing.  It’s cool and great to watch and definitely hard to master.  But it’s not what I’m looking for.  When you’re looking for art, you don’t oil painting, you don’t sign up for football.  It just wasn’t what I wanted.  Too much brute force, not enough creativity and complexity in movement.

Then on Saturday, I tried a Tai Chi school near me.  I’ve studied Tai Chi before. As a result I was skeptical of whether I would like a school that focused entirely on Tai Chi.  But I went.  The class was challenging in the mental and artistic respects.  I had complexity of movement but no brute force.  And frankly I need both.

I’m not a yoga lover simply because I need to kick and punch and be aggressive.  I need the endurance training and high energy conditioning that the martial arts provide.  And frankly, sometimes I just need to hit something.  So neither of these places would suffice in themselves.

The ideal would be to join both and get my fulfillment that way, but I have neither the time nor the money.   What I need is a place like I had before.  I place that provided more.  And everyday I’m angry about the betrayal that forced me to leave.