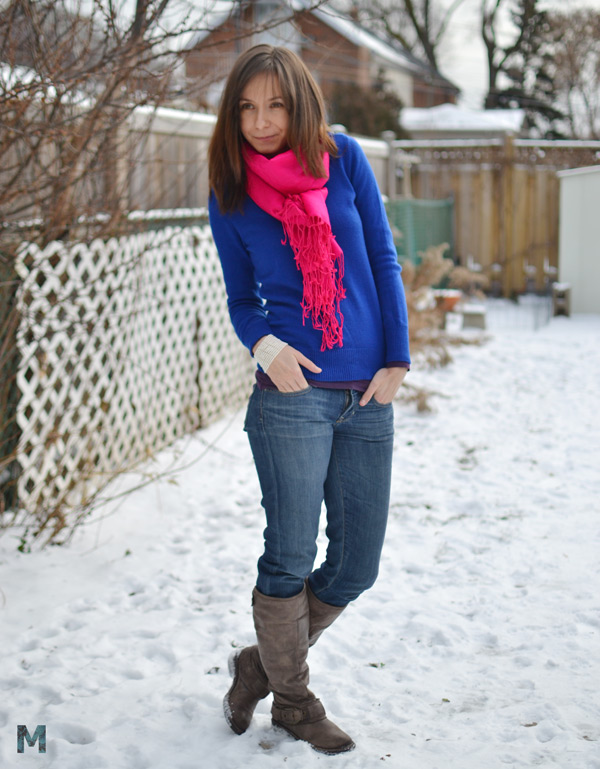 Winter has hit us hard!  It makes me want to curl up in warm sweaters and cozy scarves – so I’m just going with that instinct.  It takes a lot to get me out of dresses, but a wind chill factor that makes it feel inhuman outdoors will definitely do it.  Though not for long!

Some people think that winter has to mean you put away your bright summer things, but I don’t agree with that.  I wear sundresses, pastels and brights colors all year long.  It’s a matter of layering and co-ordinating.  I think most of the old rules, like what ‘goes’ with what, are out.  There’s appropriate clothing, like don’t wear a bright sundress to a funeral, but as far as hard set rules, like no white shoes after labour day, I think they’re pretty much out the window.  It’s all about good styling, with that you can break any fashion rule!

On a silly sartorial note – I have have to recycle the same outfit for three days! *not in a row at least* You see, for callbacks you have to wear the same thing you wore to the original audition – so two callbacks later, I’m still wearing the same stuff.  But at least I’ve booked one so far!  Keep your eyes on your tv!

True Story:
Andrew was away for five nights on a business trip.  So Drake the Dog slept on the bed on Andrew’s spot.  The first night after Andrew came back we’re in bad and Drake is standing by Andrew’s side and starting at him like, “Dude get outta my place.”
Andrew didn’t move.
Neither did Drake.
Then he whined.
*the dog not the husband*
Nothing.
Then he made a sound that was part growl, part whine, part pout, and all cute.
Andrew caved and took him into bed…for a while at least.
Tags: Blue , Pink , Scarves