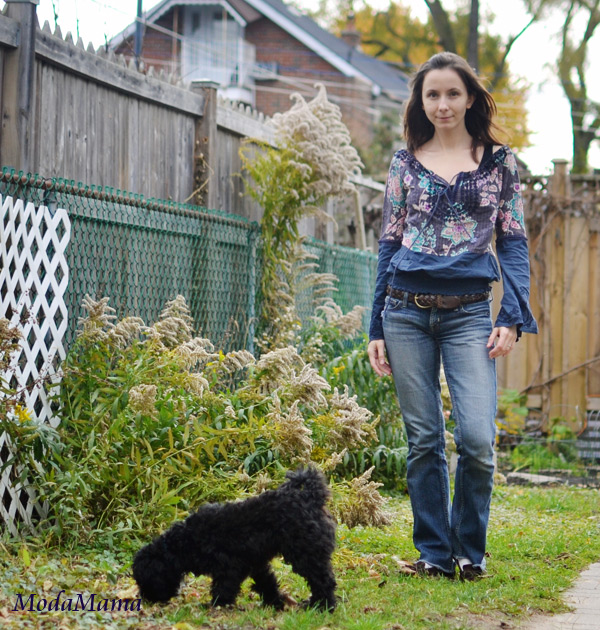 Let’s be honest, as much as I try the real star of these shots is Drake the Dog.  He’s such a ham and camera hog, but I can hardly blame him because he is pretty darn cute.  And I’m so happy to be feeling better, I couldn’t wait to get out there and take some outfit shots for you guys.  I still have a husky voice that’s a cross between Kathleen Turner and a chronic smoker, but at least my energy is getting back up and I’m not dizzy anymore.  yay!

So on that note, let’s get back to the world birth series that the Saturday Star has going on. This week the focus was on South Sudan – the most recent country since it’s only about 20 years old.  There the statistics are terrifying:
– Only 10 percent of women will see a qualified birth attendant.
– For every 100,000 live births, 2054 women die.  It’s the world’s highest maternal mortality rate.
– A woman in South Sudan has a 1/7 chance of dying in childbirth during her lifetime.
– The majority of women who die so so from treatable problems.

Again, it shocks me to hear about women giving birth under such extreme conditions.  What’s worse is that some women don’t go to the hospital given the choice because it’s considered a sign of weakness.  I know people say that women have been doing it for thousands of years, but before modern health care women also died by the thousands for thousands of years.  I don’t think it’s a sign of weakness to want to live.  Women have it tough enough already, we don’t need to have some sense of bravado holding us back from seeking medical treatment.  Hearing things like that really does make me reflect about how lucky I am to have a medical centres all around, several hospitals within 50 kilometers, and two walk-in clinics less than ten minutes away from me.  Oh, and health coverage of course, let’s not forget that.

Tomorrow’s Daily Challenge:
Sit in total silence for 15 minutes and just reflect.
I managed to not have coffee, but ooooh do I want some.
Tags: Daily Challenge , Scarves , World Birth